A new study explored the annual routine of a small primate called the great thick-tailed galago (Otolemur crassicaudatus), finding that women can be under much more stress than men.

The findings sound the alarm for the conservation of large galagos, sometimes referred to as bushbabies, which are native to sub-Saharan Africa, and other primate populations across the world, especially those in which females bear the sole burden of raise their offspring. Researchers, including anthropologist Michelle Sauther of CU Boulder, published their results on October 25 in the review Conservation physiology.

“There has been a trend of decreasing primate populations around the world in recent years,” said Channen Long, lead author of the new study and a doctoral student at the University of Pretoria in South Africa. “We are trying to see if there are any driving forces that could affect these galagos now or could affect them in the future.”

The team’s new study is heading to the Lajuma Research Center, located at an elevation of 1,200 meters (4,000 feet) and above, in the Soutpansberg Mountains of northern South Africa. Here you will find five species of primates, including large galagos. They grow to about the size of a small domestic cat and have bushy tails. 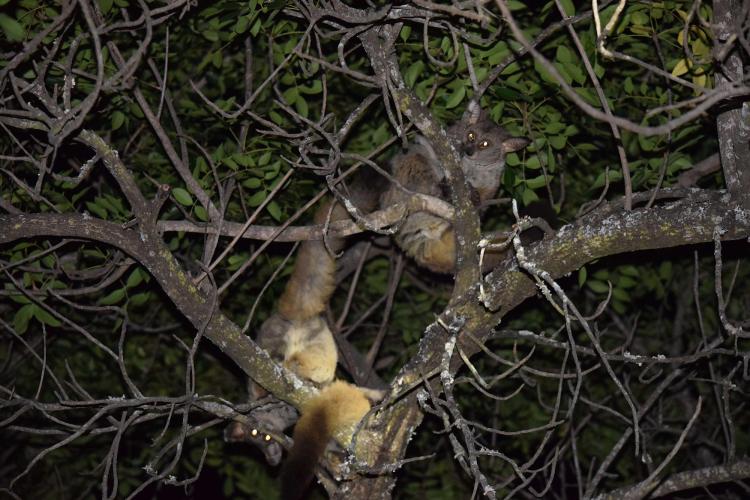 Above: A large bushbaby at the Lajuma Research Center; below: a mother bushbaby and two young in a tree at night. (Credits: Michelle Sauther)

The International Union for the Conservation of Nature (IUCN) currently classifies the status of the cute primate as â€œless concernâ€. But the bushbabies face a number of threats from humans and have been killed by cars, power lines and dogs. In recent years, temperatures in the mountain range have also skyrocketed, as humans leveled forests to make way for macadamia farms and other agricultural activities, Long said.

To get a better idea of â€‹â€‹what to expect from the bushbabies, researchers collected 186 fecal samples from wild bushbabies in Lajuma. They then tested these samples for the byproducts of glucocorticoids, a class of hormones that mammals produce when faced with stressful conditions. The team found that female bushbabies appear to experience greater increases in hormones than males. This usually happens in the southern hemisphere spring, or around October and November, when females give birth and nurse their young.

These models, Sauther said, could suggest that female bushbabies will have less room to work as they attempt to survive in a changing environment.

â€œOne thing that always surprises me is how resistant wild animals can be,â€ said Sauther, professor in the anthropology department at CU Boulder. â€œThey have a lot to do in their environment, and they are coping with it quite well. But everyone is reaching their limit.

Sauther spent years traveling to Lajuma to study primates. Winters can get cold in the Soutpansberg Mountains, she said, reaching lows of around 0 degrees Celsius (32 degrees Fahrenheit).

During his time in these forests, one bushbaby in particular stood out for the anthropologist. He was a male with one eye missing and who always seemed to be arguing with other males over females. Sauther and study co-author Frank Cuozzo, a CU Boulder alumnus, nicknamed the Bruiser Primate.

â€œThese galagos are weird,â€ Sauther said. “They have a lot of interesting personalities.”

Such a hard life, however, can take its toll on an animal’s body. Study co-author Juan Scheun explained that when mammals experience stress – they are beaten, say, or can’t find enough food – their bodies produce a glucocorticoid pulse.

“It helps the animals to have more energy,” said Scheun, a postdoctoral researcher at the University of South Africa. “It gives you that extra oomph you need to survive.”

Too much of that oomph, however, can backfire. When animals are under stress for too long, constant exposure to high levels of glucocorticoids can weaken their immune systems and even affect their brain function.

In the new study, researchers set out to find out how well Bruiser and his friends and foes cope with stress in the forests of Lajuma.

The team spent a year roaming Lajuma, following the animals as they searched for insects, fruit and tree gum in the summer and faced leaner periods in the winter. They collected monthly fecal samples from various bushbays during this period. Long explained that the poo samples contain a record of the byproducts, or metabolites, of glucocorticoid hormones.

She added that the team speculated that these hormone levels would increase in males during mating season, June through August, when they compete for females.

â€œI was expecting to see some kind of elevation during this winter period during mating season, but we didn’t see anything,â€ Long said.

Scheun noted that the team’s findings may indicate that female and male bushbabies face different pressures in their environment, a finding he says may hold true in other primate species. When it comes to protecting endangered species, that is, the sexes are not always equal.

“In most mammals, females bear the brunt of the work, especially when raising young,” Scheun said. “For many species of primates, I think you will need to take the gender differences into account when making conservation decisions.”

Other co-authors of the new study include James Millette, a CU Boulder alumnus, Adrian Tordiffe and Andre Ganswindt of the University of Pretoria.