A new era is dawning where art, unlike many before it, is written, constructed and performed by AI. Innovators not only unearthed old art forms and created new versions using AI, but also built completely new sculptors, solutions, and even magic robots. 2021 presented the world with many new works of art built together by artists and AI experts who push the boundaries of what can be called â€œartâ€ per se.

Here are the biggest breakthroughs in the art of AI in 2021:

Ludwig van Beethoven died in 1827 and left only a few musical sketches of his 10th symphony. In October 2021, a full recording of Beethoven’s 10th Symphony was released. The Karajan Institute, an Austrian-based organization that promotes music technology, has created a team including Austrian composer Walter Werzowa; Mark Gotham, a computer music expert; Robert Levin, musicologist at Harvard University; and Ahmed Elgammal, professor, director of the Art & AI Lab, Rutgers University, who made this possible through AI. They had to teach the AI â€‹â€‹to take a melodic line and harmonize it. The machine had to learn the construction of Beethoven’s Fifth Symphony from a basic four-note pattern and develop a longer and more complicated musical structure. The AI â€‹â€‹then learned to connect two sections of music and composed a coda. Once the complete composition was found, the AI â€‹â€‹now had to orchestrate it. It took the team 18 months to build and orchestrate the entire two movements of over 20 minutes each.

In 2021, notorious celebrity videos from Elon Musk to Kim Jong-un and even Monalisa singing songs made circles on social media. Yes, these deep fakes were created using AI, and credit goes to Ben-Zion Benkhin’s Wombo.Ai, an AI-powered lip-syncing app. The company also created Wombo Dream, the software that converts text into computer-generated paintings. The company has not disclosed the technologies it uses, but experts suspect it is using the VQGAN + CLIP architecture, where AI converts ideas into paintings.

NVIDIA also announced the latest version of NVIDIA Research’s AI paint demo, GauGAN2. Powered by deep learning, the model consists of a function of converting text to image. It is one of the first AI models that integrates multiple modalities, semantic segmentation, text, sketches and styling within a GAN network. Earlier this year, NVIDIA released a GauGAN-based tool, NVIDIA Canvas, which can be used on any NVIDIA RTX GPU. GauGAN2 was trained on 10 million landscape images using the NVIDIA Selene supercomputer.

Revealed a painting by Pablo Picasso

‘The Lonesome Crouching Nude’ was discovered hidden under the surface of a painting by Pablo Picasso. It has been revealed by Oxia Palus that it uses AI, advanced imaging technology, and 3D printing. The company found this painting under Picasso’s “The Blind’s Meal”, which dates from 1903. Founded by George Cann and Anthony Bourached, the Oxia Palus team used XRF imaging and processing. images to reveal the outline of the hidden paint first, then formed AI to add brushstrokes to the portrait in the Picasso style. He then generated a height map of the portrait to give it some texture. The image was printed on canvas using 3D printing technology.

Suchi Reddy and Amazon Web Services produced the piece titled â€œyou + me FUTURESâ€, an interactive sculpture that translates spoken words into lights and colors. It is on display at the Smithsonian’s Arts and Industries Building (AIB), in the United States. The artists refer to the 25-foot-high and 20-foot-wide sculpture as a reflection of the “collective consciousness of society” and their thoughts on the future. First, visitors share their thoughts and feelings about the future with (at) the sculpture, after which the words are picked up by microphones and sent to the cloud. Here, AWS uses AI to translate these words into corresponding lights and colors that match the theme of the statements. It took Reddy and AWS two years to build the sculpture, and they used tools like Amazon Comprehend, Amazon Transcribe, and a custom Amazon SageMaker model.

Designed in Oxford by Aidan Meller, ultra-realist Ai-Da performed poetry written by her at the Ashmolean Museum in Oxford. Although Ai-Da is not the AI â€‹â€‹capable of writing poetry, this year, for the first time, she has. The robot received Dante’s epic three-part narrative poem – The Divine Comedy, and she used her algorithms, word database, and analysis of speech patterns and produced responsive work.

DAISY – an AI that powers KULTURA helps users discover new arts, create and share high-resolution collections and view them in 3D virtual spaces. DAISY is based on a unique data set of interactions between people and works of art and generates personal recommendations based on behavior. By using KULTURA.art, an online art platform that hosts over 20,000 works of art by 2,700 artists in over 100,000 3D parallel galleries, users receive personalized recommendations on paintings and artwork. art they’ll love, similar to what Spotify and Netflix do for music, movies, and shows. , respectively.

Receive the latest updates and relevant offers by sharing your email. 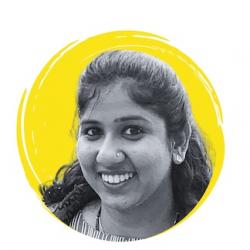 Meeta has completed the PGD in Business Journalism from IIJNM, Bangalore. She has over six years of journalism experience writing about emerging business technologies with a focus on digital transformation. She loves to go on bike rides and stays in touch with nature. Contact: [email protected]